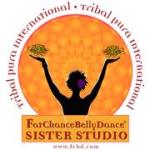 Sister Studios are graduates of General Skills for ATS® and ATS® Teacher Training. These teachers are dedicated to presenting ATS® as created and developed by FatChanceBellyDance® director and master teacher Carolena Nericcio.  Sister Studios do not blend ATS® with other styles of dance, tribal or otherwise.  They present ATS® only, or clearly separate ATS® from other styles of dance they are presenting. Our goal is that you, the student, should be able to attend an FCBD® ATS® class anywhere in the world and receive consistent, quality instruction.  Click here for a full list of worldwide FCBD® Sister Studios.

Susan became a FatChanceBellyDance® sister studio in 2011.  She  attends workshops and private lessons to continually improve her understanding, teaching  and execution  of ATS®.

Performing with Kristine Adams of FCBD® after a day of Private lessons, Edinburgh, 2014

We were thrilled to host Kristine Adams in September 2014 on part of her world belly dance tour.